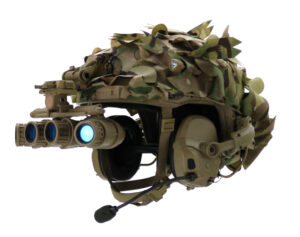 The Predator Ghillie Helmet Cover Scrim Is the evolution in concealment for the end user achieving perfect fit and function. Disappointed with the lack of purpose-built concealment for some of the harshest outlines of the end user we sought out to develop the Predator Ghillie Project. We designed this to fit any size high cut/Fast/Mid and High Cut, ACH/IHPS/LWH helmets, secured with the use of shock cord allowing any user to get a proper fit regardless of size, make and attachments. Ear-Pro, Comms, Strobes, Even NVG mounts will work with the Predator Ghillie Helmet Cover. We wanted to make the solution to an age-old problem that scrim could never fix.
To assemble this product merely route the included bungee through the dual laser cut slits around the perimeter and tighten to your preference. Included in this product we included 8 Predator Dreads, Allowing the end user to add even more break up to their Helmet cover to allow for critical concealment in non-permissive environments. Tie them to the cover, push them through the strategically placed laser cut slits, burn them with a bic onto it, wrap them around your boom mic, tie them to your NVG mount, we made this cover to work for anyone in need of concealment, anywhere.
The Predator Ghillie Helmet Cover Scrim Simply and effectively grants the end user the most advanced concealment solution for both seasonal and terrain changes. Easy and fast to deploy, Small enough when compressed to fit into a pocket or small pouch. Being available in most patterns, there will never be a reason to stand out when blending in matters most.
MultiCam™ fabrics are treated for near IR (infrared) signature issues. Nearly all MultiCam® printed fabrics are tuned for both visible and near IR spectrums. We can not confirm all color options we offer will reduce IR signature.

We continue to add to the HELMET FITMENT LIST. If you have a helmet that is not on the list and have confirmed fit. Please send us the Manufacture, Model and Size.